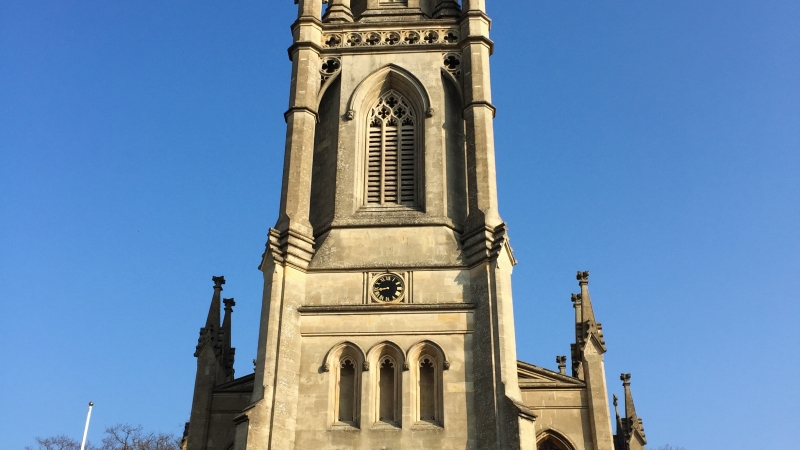 In 2006 structural problems with the Tower were identified. It was discovered that metal cramps had been inserted into the soft Bath stone of the Tower in an attempt to hold it together.

Unfortunately iron rather than more expensive brass or bronze was used for this purpose and after 150 years of howling winds, traffic vibrations and ageing, water had seeped through the mortar and corroded the iron. Expansion from the rusting iron had “blown out” the soft Bath stone, making the path below unsafe and threatening the overall stability of the tower.

Work began in January 2006 to conduct investigations to find the extent of the problem. In April 2007 the second stage of work commenced with repairs to the upper level of the tower. A very successful fundraising appeal brought in the requisite £400,000 needed to complete the work and a Service of Thanksgiving on 16 December 2007 led by The Bishop of Bath & Wells marked the end of the repairs stage of the project and the installation of the new ring of bells.

Local people and businesses, Trusts and charitable foundations donated money and expertise to ensure the project was completed and the Tower was saved. The Tower conservation work was carried out by Minerva Conservation.

The clock on the tower was also repaired and a new lighting system was also installed, enabling the tower to be lit in a range of different colours reflecting the seasons of the church – the “Advent purple” being particularly distinctive. The new system uses a fraction of the energy that the old floodlights used and in 2008 we were awarded a national award for our environmentally-friendly and low-pollution external lighting system.

More information on the tower lights

The Gargoyles of St Stephens

When the works on restoring the iconic tower of St. Stephen’s was completed in 2007 and the aims of the Tower Appeal fund-raisers in raising the £500,000 cost was concluded it was hoped by the Rev. LLoyd and the committee that we could install a plaque to record the efforts of all involved, the stone masons, the professional advisers, the volunteers and the sponsors and donors.

At long last The Gargoyles of St. Stephen’s has been erected in the Tower entrance.This collage of gargoyles is just a sample of the many faces which adorn every corner of the Tower, some visible, many not, and was photographed by Alastair Chalmers when the scaffolding was in place. It is the only known record of these carvings. The collage does not include all the many and various individual works of the original Victorian masons which is now on photographic record but is highly representative of the various facial contortions that are amazing and must include many of the original workers as these were usually based upon fellow workers or even donors and the vicars then involved. This collage now records all those efforts for posterity and is particularly important as Bath stone is a soft stone and the gargoyles will in the fullness of time erode.Bringing this to fruition was due to the skilful photography of Alastair, the initiative of Vivien Simpson who also arranged the printing and is donated by myself as former Chairman of the Tower Appeal as a tribute to all involved.— Bob Carlton-Porter August 2012.