St Stephen’s church is an example of Victorian gothic revival architecture, but although the foundation stone of the church was laid in 1840 the church building developed in a number of phases. It is grade II* listed and was built by the well-known local Bath architect, James Wilson.

The design of St Stephen's decorative and distinctive tower was inspired and influenced by the magnificent cathedrals of Europe. It was constructed in three stages, it has a square base, an octagonal tower and is topped by impressive freestanding corner pinnacles that are attached by traceried flying buttresses.

The interior of the church as it is seen today has a great feeling of spaciousness, as there are no obscuring pillars. The whole building encourages you to look forwards and upwards. Forwards towards the altar and the splendid reredos of unusual stone and mosaic work and towards the great chancel arch. Upwards to the massive roof beams beautifully painted with texts relating to the martyrdom of St Stephen.

Above the altar is a Jesse window which commemorates the church’s first jubilee (50 years) and at the base of the reredos, designed by Sir TG Jackson ARA, a seven-pronged candlestick is depicted, an interesting addition as it is a sign of the Jewish faith. There is also an unusual Christian symbol of a pelican allowing its young to peck at its breast, showing the love of the Saviour for His people. The central cross made an altar cross unnecessary and reflected the theological emphasis of the time.

Wilson went on to design many buildings around Bath, including Kingswood College c1851 and the unusual, enormous asymmetric Secular Gothic design for Bath Royal High School c1858 (formerly Lansdown Proprietary College). Around the outer slopes of the city, particularly on Lansdown between St. Stephen’s and Kingswood College are numerous Victorian Gothic Villas, several are known to have been designed by Wilson, and it is extremely likely that many more are attributable to him.

In 1866 William Willcox joined his firm and as a pair they continued to design many buildings in the city, including four English/French Gothic churches that are typical examples of the style popular in the latter half of the century.

The church was originally conceived as a plain rectangular structure but the orientation of the altar towards the north (in the area now at the foot of the chancel steps with the black and white chequered tiling on the floor) instead of the east was deemed to be unacceptable by the then Bishop of Bath and Wells.

The solution to this problem was found in the construction of the eastern transept, now called the Timothy Aisle (taking its name from the small window in the side wall depicting St Paul entrusting the faith of the gospel to young Timothy) which was planned to accommodate the altar. As a balance to this there was to be a western transept, which is now the Baptistry.

The tower was built between 1840 and 1845 and was constructed in three stages.

In the 1840s the Glastonbury chairs found in the sanctuary were given by the Rector and Churchwardens of Walcot. Some pieces of ancient church carving were given by Joseph Long the builders.

One of the oldest windows in the church can be found in the eastern transept, the “Resurrection Window” is a memorial to Sydney Widdrington’s father.

The font in the western transept was given in 1843 by William Finder. The font and cover are said to have been designed by Edmund Blore and made by M Cundy, a master mason of Westminster Abbey, similar ones can be found in St Mary’s Taunton and in Falmouth Parish Church in Cornwall. This font could not be used until the church was consecrated in 1880. 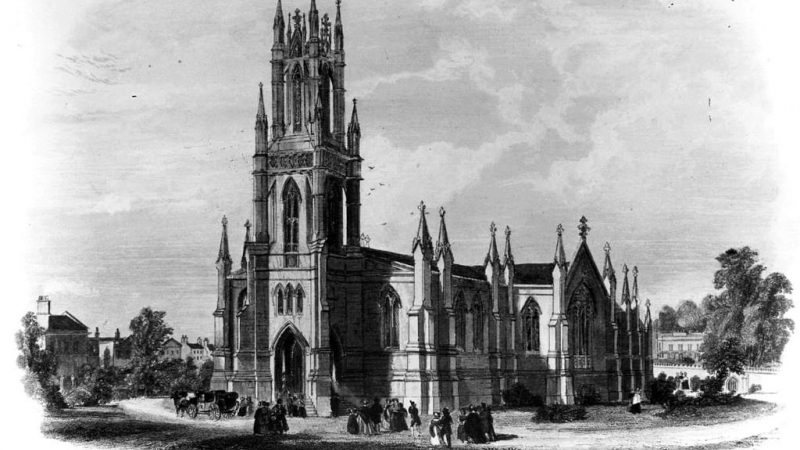 When the church was licensed for worship in 1845 the building was markedly different from the building we see now. Where the chancel arch is today the end wall of the church stood; there was little decoration and the side chapel was yet to be built. There was a small organ at the back of the church. 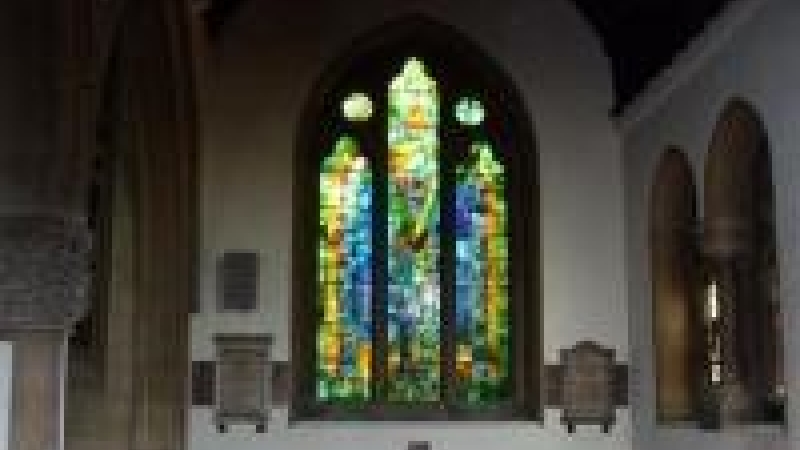 The side aisle to the right of the church was added in 1866 to accommodate the girls of the Royal School for Daughters of the Officers of the Army. Their pews faced in towards the church. It houses a memorial window to the first Headmistress, Miss Emmeline Kingdon, which was installed in 1884 by her former pupils. In the window the school tower in its original form is placed within a Jerusalem street scene.

In September 1880 the church was finally consecrated and in the years that followed a number of developments were seen. The foundation stone of the chancel, designed by William Wilcox, was laid in July 1882, and was consecrated by Bishop Lord Hervey in 1883. The cost was £1700 with an additional £400 for the organ.

The brass eagle lectern was presented in 1884 by the friends and relatives of Miss Vaughan. “Three friends” gave the alabaster and Siena marble pulpit to the church in 1889 and in the same year the oak pews were installed.

In 1886 and 1887 the walls and roof beams received their painted decorations and the interior of the church took on the appearance much as we see today.

In September 1880 the church was finally consecrated and in the years that followed a number of developments were seen. The foundation stone of the chancel, designed by William Wilcox, was laid in July 1882, and was consecrated by Bishop Lord Hervey in 1883. The cost was £1700 with an additional £400 for the organ.The brass eagle lectern was presented in 1884 by the friends and relatives of Miss Vaughan. “Three friends” gave the alabaster and Siena marble pulpit to the church in 1889 and in the same year the oak pews were installed.In 1886 and 1887 the walls and roof beams received their painted decorations and the interior of the church took on the appearance much as we see today.

Following the 1914-1918 war the Royal School side aisle was converted into a side chapel in memory of those who had died. During the Second World War bombs nearby caused minor damage. With money received as War Damage Compensation a window was installed just in front of the gallery, which depicts many famous men and women within the theme of the vine.

In 1966 the gallery at the back of the church was enlarged and the narthex, now known as “The Foyer” was constructed. The Foyer was extensively refurbished in 1996. The modern “St Stephen” window was dedicated in February 1983 to commemorate the centenary of the formation of the parish: it is the work of local artist, Mark Angus.

In 1991 plans were formed to create a hall and in 1994 the St Stephen’s Church Centre was opened in the converted crypt, which had been built to house burials but had never been used for this purpose. Today it is a thriving centre for the whole community.

References for this article